Download the 'In Ruhleber Camp' programme of events booklet here: 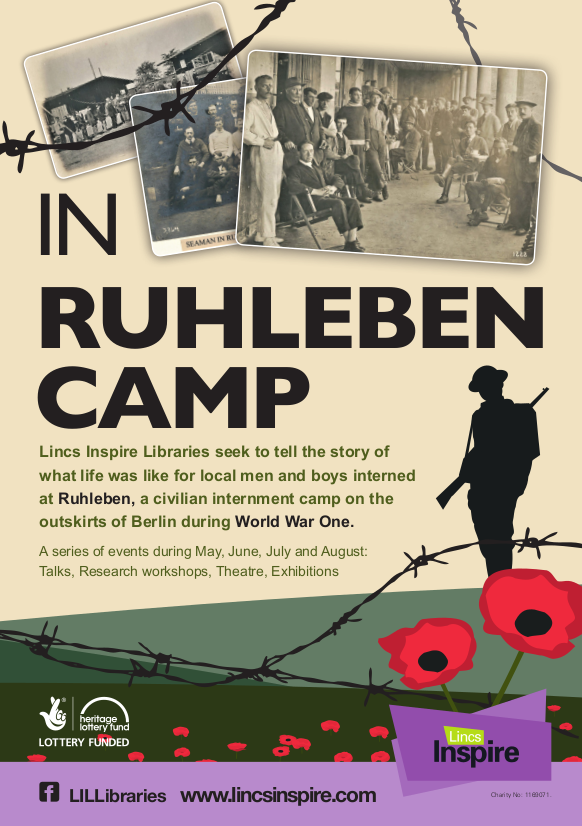 When the First World War started on the 4th August, 1914, many British citizens were in German territory.  Seamen and businessmen, actors and jockeys, musicians and holiday-makers, and many others, were pursuing their several occupations and pursuits.

Personal accounts published later give widely varying pictures of what then ensued.  Some speak of hostility from the Germans and others of compassion, but the over-riding impression is of worry over relatives at home, frustration over their inability to join in the national war effort, and anxious uncertainty over their eventual fate.  The only sure thing they did know was that, with the exception of women and children, they were unable to leave German territory.  The general pattern initially was of enforced regular reporting to the local police, with subsequent arrest and imprisonment; all this culminating on the 6th November 1914 in a government decree that all male British subjects, except clergymen, doctors, lunatics, and bed-ridden invalids, between the ages of seventeen and fifty-five should be arrested and taken to an internment camp.

So began the saga of Ruhleben – Ruhleben, a trotting track set on the outskirts of Berlin and close to the heavy industrial quarter of Spandau.  An English translation of Ruhleben is “Peaceful Life”, and one assumes that the pre-war race-goers found it a place of pleasant relaxation.  But to those men who were brought from all parts of the German empire it could only be a prison.

Men from the port of Grimsby figure prominently amongst those interned.  Many suffered the squalor and filth of being held in the infamous Hamburg “hulks”, before being sent on to the relative wholesomeness of the internment camps.

Internment camps at Celle and Sennelager also received their consignments of internees but it was in and amongst the stable blocks and grandstands of Ruhleben that men from Grimsby and the surrounding area participated in creating a society which caused the Commandant of Ruhleben to remark in 1916, “ You mustn’t suppose that the camp was always like this.  When the men were first brought here, the place wasn’t fit to keep pigs in.  All that you have admired in the camp they have themselves created.”

The sources in the collection include:-