For 167 years Grimsby Dock Tower has dominated the town's skyline, a stark and impressive sentinel known to seafarers around the globe. The 309ft high tower has played a fascinating role in the town's industrial history.

Many Grimbarians will tell you that the Dock Tower stands on a foundation of cotton wool. It is a fallacy. The foundations of what must rank as one of the town's best known buildings are of solid masonry - built upon a timber pile bearing. 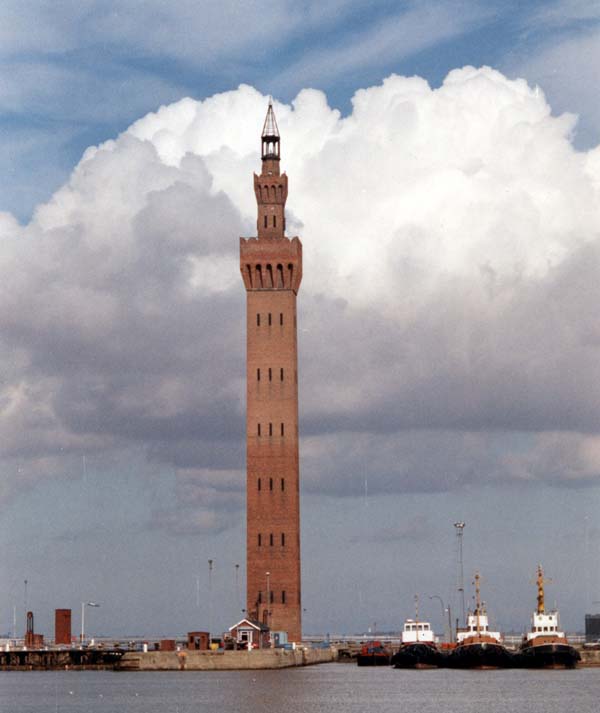 The cotton wool legend is a story many are proud to tell. It probably arose because someone said of the commercial trade in the Royal Dock that the foundations were laid on cotton. In other words, the import of raw cotton through Grimsby for the mills of West Yorkshire a century ago paid for the building of the tower.

The tower's real story is much more down to earth than that...

When planning the docks layout in the mid-nineteenth century it was decided to use hydraulic pressure to open and shut lock gates (there were to be 10 pairs of them), to operate cranes on the Royal Dock and to control the gate of the new railway crossing on Cleethorpe Road.

A reservoir holding 30,000 gallons of water was installed 247ft up inside the tower and this ensured a pressure of 100lb per square inch.

In 1900, a new system was installed using accumulator towers involving a weight of 300 tons to create the necessary pressure and this meant virtually the end of the practical use of the main tower as a provider of hydraulics for the docks.

Taken from an article published in the Grimsby Evening Telegraph
written by local historian George Black.

Today's Town Hall is Grimsby's fourth. The original building was built near St James's Church in the 13th century, and a second followed in 1391. The third Town Hall was built in 1780, across the road from what is now the site of the Grimsby Town railway station. It was demolished in 1868. The present Town Hall was built on the edge of town in the Six Acres field, and was opened in 1863. An impressive Council Chamber was added to it in 1888. 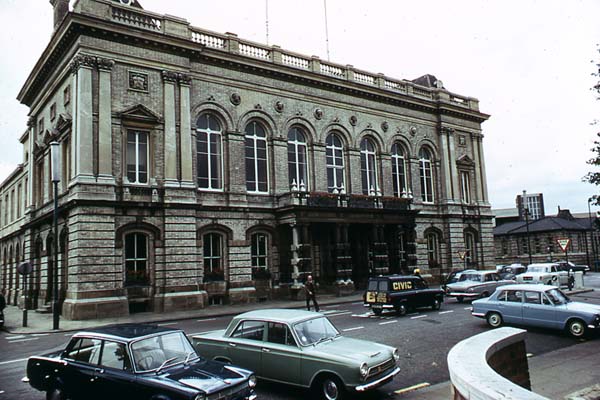 The following is an extract from the Illustrated London News of October 31, 1863:

'The new Town Hall, with its suite of offices, is a noble pile of buildings, standing in an excellent position in close proximity to Victoria Street, and comprises all the various apartments required for the transaction of the public business of a corporate town.

The style chosen is Modern Italian, well carried out and executed in stone and white brick. The entire front consists of a centre, with pavilion wings, formed by projections, with Corinthian pilasters upon a rusticated basement.

In the centre of the front is an open portico of coupled, rusticated Ionic columns, forming a capacious covered entrance. The centre main floor is composed of seven recessed arches, in which are circular-headed windows, surmounted by a modillion cornice and an open balustrade.

On the wall of the facade, in the spandrills over these arches six circular panels are placed, containing busts of the Queen and the Prince Consort, Archbishop Whitgift (born at Grimsby), King Edward III (who granted the land to the freemen), the Earl of Yarborough (High Steward of the borough) and Gervase Holles (historian and Mayor of Grimsby AD 1640). [Some records show that Hollis, also spelt Holles, was Mayor in 1636 and 1638].

The ground floor comprise entrance, vestibule and corridor with staircases to the public room, or townhall; offices for town clerk, magistrates' clerk, and surveyor; council-chamber and sessions house, with requisite waiting-rooms attached; police offices and cells for prisoners (which have been highly appoved by the government inspector of Prisons), with residence for superintendent of police; engine-house, and all other requisite storerooms.

In the centre of this group of buildings an open court is formed, adapted to the exercise of the police brigade, and round this a covered corridor gives easy access to the various departments.

The large hall is situated on the first floor, and is 80ft long, by 40ft wide and 30ft high, with staircases at each end of the building over which a gallery and orchestra are formed, making the hall a total length of 112ft.

The sides of the hall are divided by Corinthian pilasters, surmounted by a modillion cornice, over which rises a deep core, with ribs and panels. The plancier of the ceiling is is formed into twenty-seven coffers, by enriched stiles.

The arrangement of the plan, in planning so many departments convenient of access to each other, and giving them perfect isolation and grouping so as to form one compact whole, reflects great credit on the architects Messrs. Bellamy, Hardy and Giles, of Lincoln and the work has been efficiently carried out by Mr John Brown, contractor of Grimsby, Mr Maughan, the Borough Surveyor, acted as Clerk of the Works. The entire cost of the building is between £8000 and £9000.'

The 'Guardians of Knowledge' can be seen on the outside wall of the Grimsby Central Library in Town Hall Square.

The five 11 foot figures were designed and built by Mr Peter Todd, who was the Head of the Art Department at Grimsby College at that time. They took him 18 months to make at his studio in Walesby. 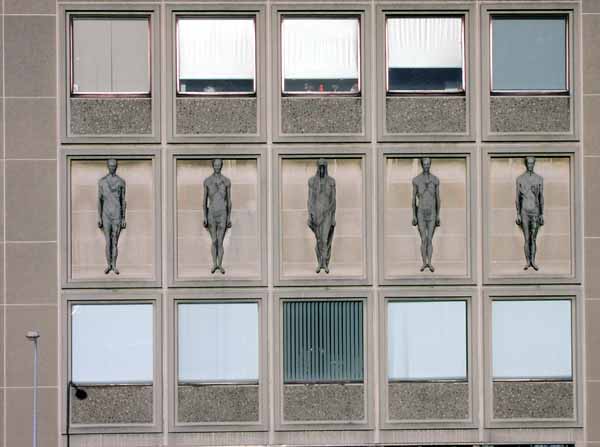 The figures, which were fixed to the front of the library in May 1968, are guardians, protecting the new centre of learning and culture in the town.

Other pieces of public art were commissioned to adorn the new Central Library. These include a mosaic, a large stained glass window, a bronze replica of the town seal, a tapestry and mural paintings, all executed by local artists.

The two forts were built during the first world war, Haile Fort being on the Lincolnshire coast two miles downstream from Cleethorpes, and Bull Fort on a sandbank in the middle of the river, in a southwesterly direction from Spurn Lighthouse on the northern bank of the river.

Together with the fortifications on Spurn Point, their object was to make the estuary into a safe assembly point for coastal convoys.

Their construction took over three years, hundreds of massive blocks of concrete being sunk into the sand to form a firm foundation on which the superstructure of the forts could be built. 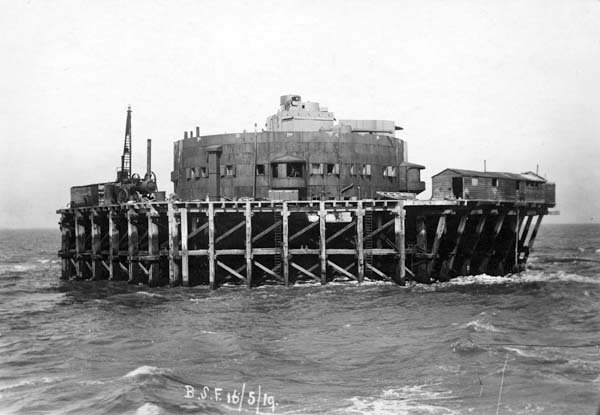 Each of the forts cost over one million pounds, and were regarded as 'an outstanding triumph of modern engineering'.

The Bull Fort was the most difficult proposition and was built circular on interlocking steel piles in the form of caissons, and then connected by further piling, giving a cell-like effect on plan. The outer compartments were filled with concrete and the round inner one with sand, the hole being capped with concrete, giving the impression of a huge bucket of steel and concrete enclosing a great cylinder of sand. From this the floors were built.

The garrison consisted of 200 men and their officers, and provided all necessary amenities.

The Haile Sand Fort is on a slightly smaller scale although similar in design.

Both forts were manned by the army during the last war and were continually attacked by enemy aircraft and U boats.

In 1956 the army left the forts and several ideas were put forward as to their possible future use. One suggestion was that the Bull Fort could be used by the pilots who were on duty in the river, rather than having to live on board the pilot cutter, which could be very uncomfortable in rough weather. Another suggestion was that if nature eroded another quarter of a mile off Spurn Point, Bull Fort would be outside the three mile limit and could be turned into a duty free drinkers paradise!

The forts were manned by civilians until the early sixties, when the Humber Conservancy Board became the owners. Bull Fort is used as a navigational aid and has a huge bell at the top which is automatically rung by a gas pressure hammer. Apart from that and the lights on board, there is an automatic tide gauge which tells ships' masters the state of the tide and whether they will have enough clearance to get up the river.

St James was not the original Church of Grimsby - this was St Mary's which was on Victoria Street hence - the names St Mary's Gate East and West.

The original date when St James' was founded is uncertain. However, there has been a church on this site for over 880 years with the first documented evidence being 1114. The parish church was mentioned in the Doomsday Book. You can also see Roman and Saxon bricks in the west wall.

Sir Thomas Heneage acquired the church and its land in 1558 - together with the right to nominate the vicar - following the dissolution of the monastery in 1536. 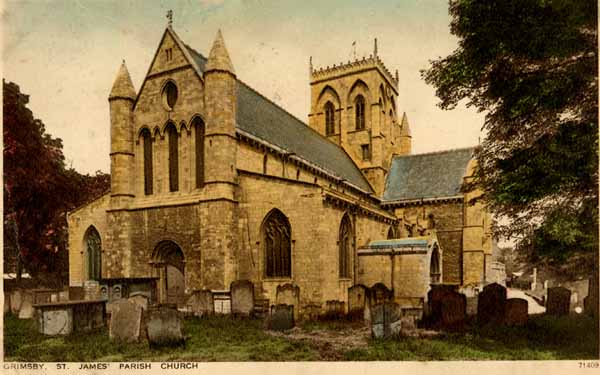 The transepts of the Church have been used for various things in its history. The town's fire engine has been stored there, it has been used as a school room and the place for the election of the town's mayors.

John Wesley preached in the Church in 1758.

The Choir School was founded in 1880 by Canon James Peter Young. It became known as the James's College in 1883. St James's Church is the only parish church in the country to have a choir school attached to it.

On 14th July 1943 there was an air raid on the town and two bombs were dropped on the churchyard. These destroyed the north wall of the transept, nearly all the windows were broken and most of the slates were blown off the roof. The only windows not damaged in the Second World War are those in the Memorial Chapel built to commemorate those who lost their lives in the First World War. Even today signs of shrapnel can be seen in the north face of the Lady Chapel walls.

This series has been compiled from a range of resources, including comprehensive collections of local cuttings and photographs, books and pamphlets, held in the Local History Library in Grimsby.